Recipe to be a good girlfriend (and make a trapanese pesto) 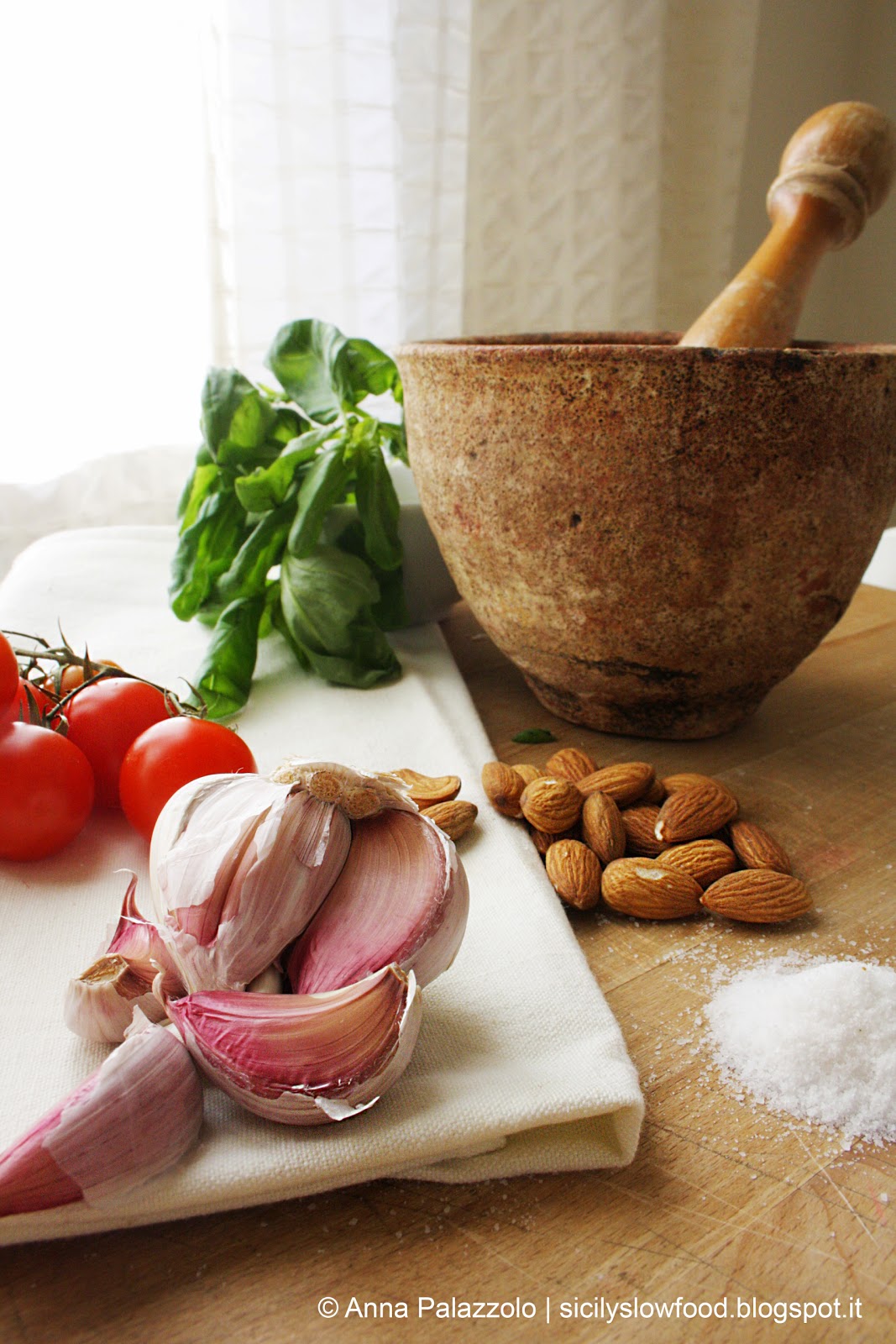 When you have an enthusiastic boyfriend you could be in surreal situations.

The real issue is that Giovanni is an enthusiastic guy. Everything begins with a group of people who wanted to take a holiday in Sicily. He recommends  places and typical foods but he's an unpretentious man, so he suggests, talks and then says 'Have a dinner all together!'. This is a very sicilian attitude and it's nice meeting new people and eating in company. Also when they say: 'He wants to come too, is there another spot?', yes, of course.

'Listen, that dude has talked about his holiday in Trapani and the dinner which you're preparing to his sister. She wants to come too, can she take part with her family?' , yes,
there are other spots. And once again, and again, do you remember those big parties during the high school period? An enthusiastic is a yesman and doesn't consider the effects at the moment.
Here's why Giovanni had to become a chef. At the Scurati Cave, because the restaurant was too normal, the place is spacious and with a breath-taking view, perfect for a big friendly feast. And you had to help him.

Well, but what could we prepare? The group was big, so we would have needed to cook something of fast, simple, good...and traditional. We had to agree everybody, vegans too, and this is a big problem, the vegan recipes have often the strangest ingredients. The answer appeared to be pasta with fried zucchini but the brilliant idea arrived: pasta with trapanese pesto! Fast, simple, uncooked (only the pesto), vegan and, above all, with terrestrial and sicilian ingredients! 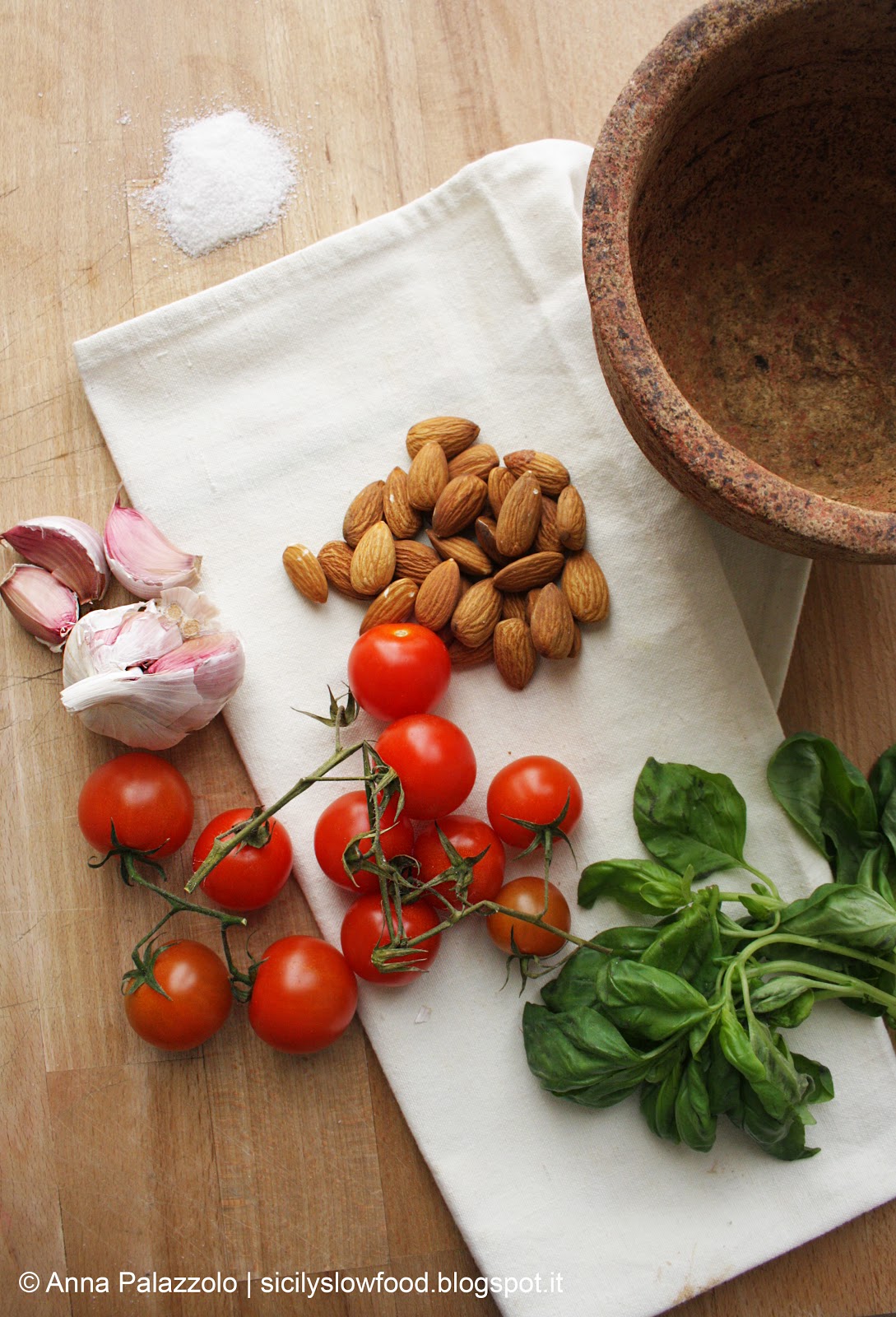 Sorry but there aren't exact quantities

- Fresh basil (my basil was exhausted after a photographic service lasted one hour but was fresh :P  )
- Olive oil
- Sicilian almonds
- Tomatoes (Pachino or also the canned ones, please tomatoes, not sauce!)
- Red garlic from Nubia
- Trapani sea salt
- Pestle and mortar (if you are in vintage mood. You can use the less poetic blender but the pesto will have another texture, of course. The original one is made with the mortar. In the photos I used an old mortar in baked gres bought by my grandmother for my mother :-)
- One volunteer to procure all ingredients


Put the garlic, a pinch of salt and the basil in the mortar and press them turning the pestle into the mortar. Add oil to obtain a cream. Crush the almonds and put them with the garlic. At the end add the tomatoes cut before and oil. Let the pest rest while the pasta cooks :)

The result was full stomaches and large smiles, so it works! For this reason we have decided to replay the event, but this time we're teaching to you to prepare it, and we're eating the pasta with our pesto all together on the terrace, to be more comfortable and near the sea. Do you like this idea? So see you soon! :)


P.S. For more information about the workshop "Trapanese pesto" you can write to granveliero@gmail.com
P.P.S. (Here the photos of event :-) 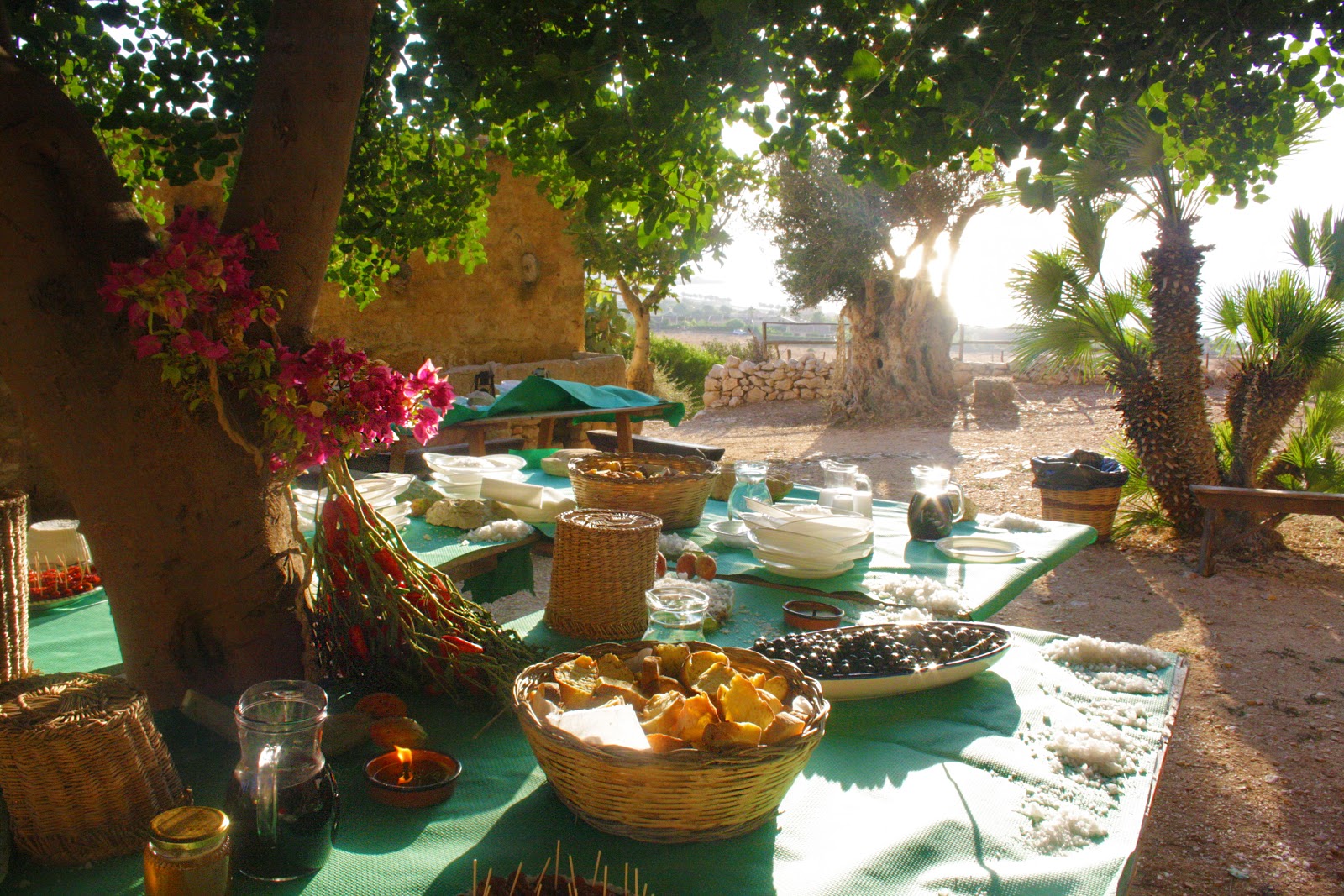 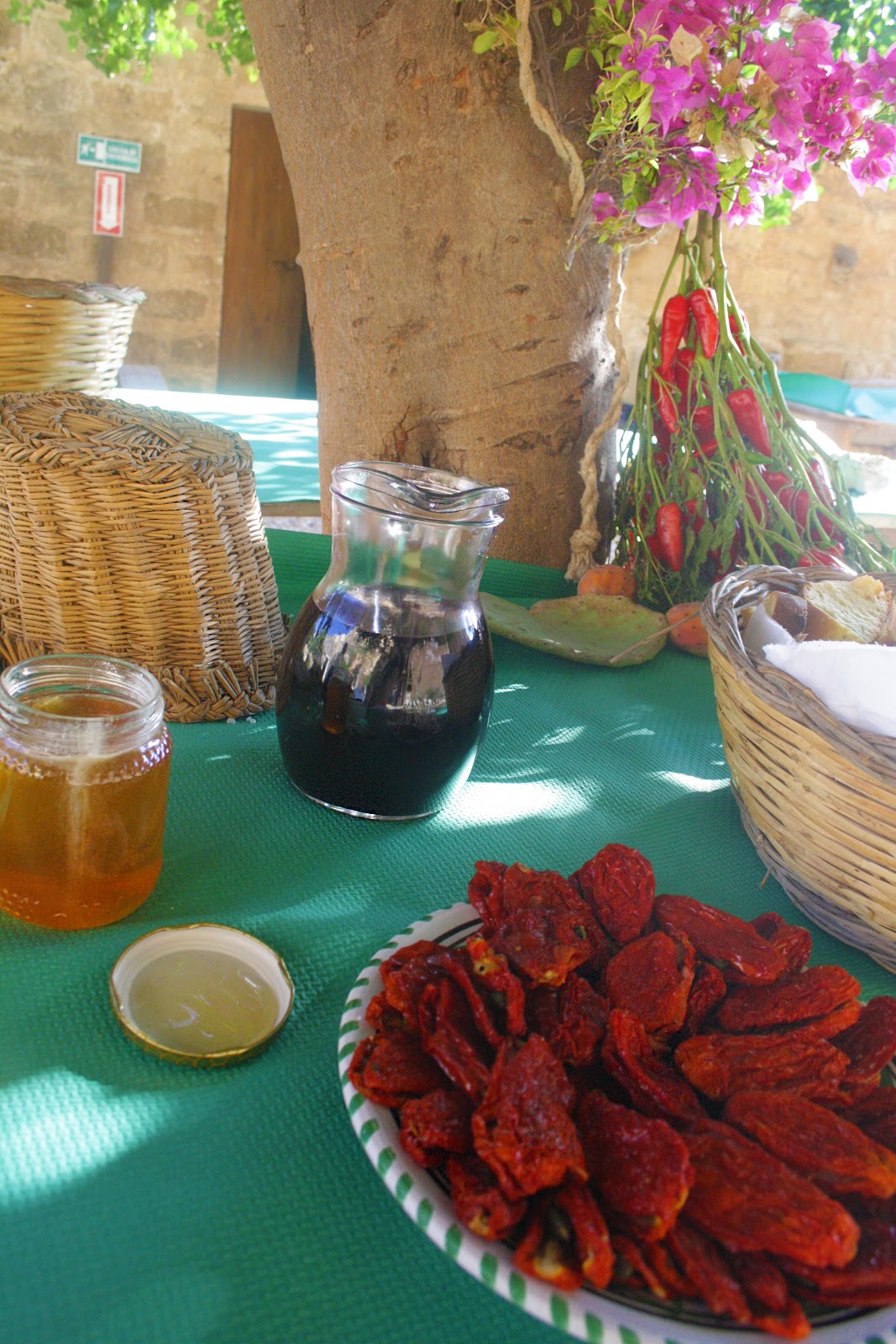 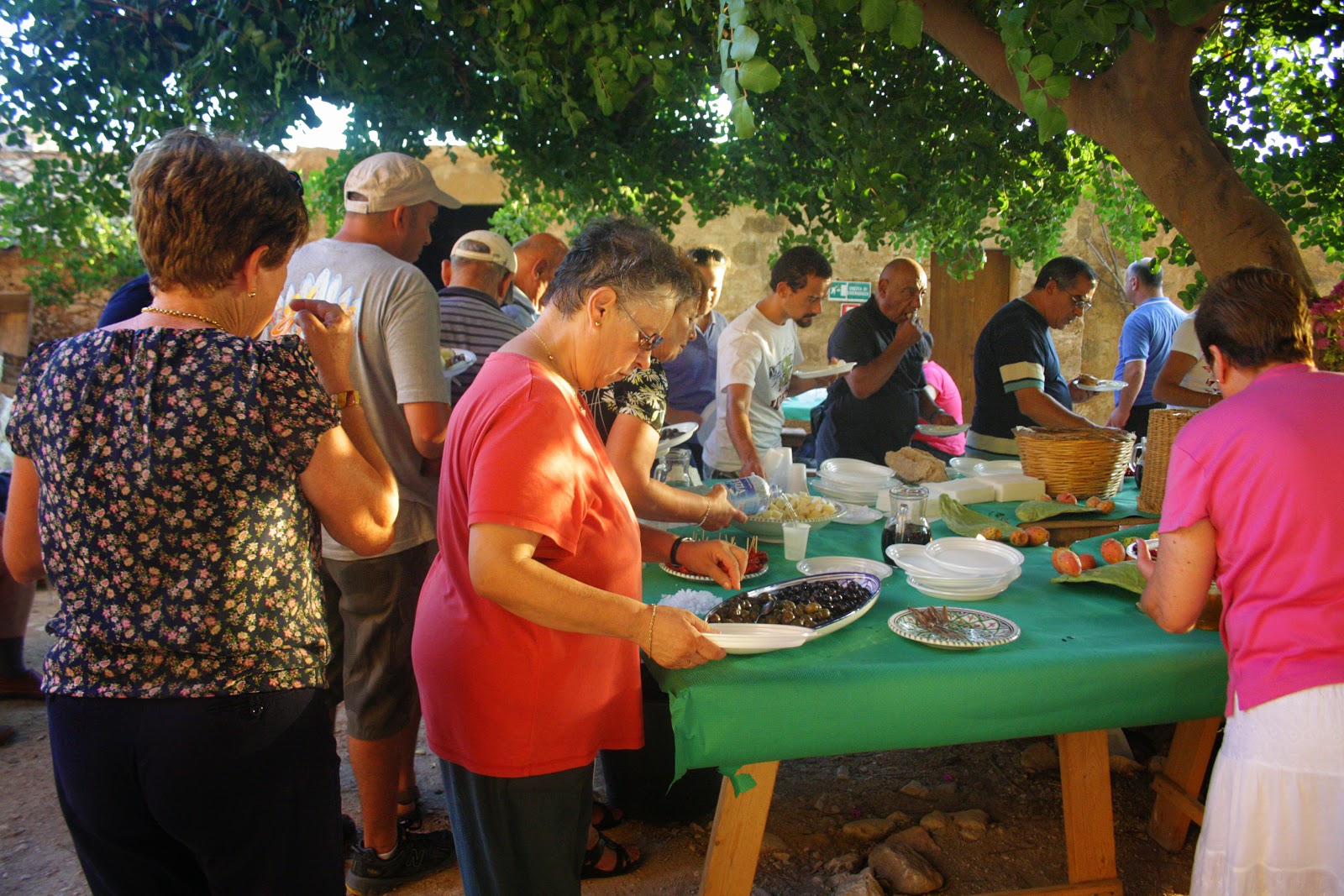 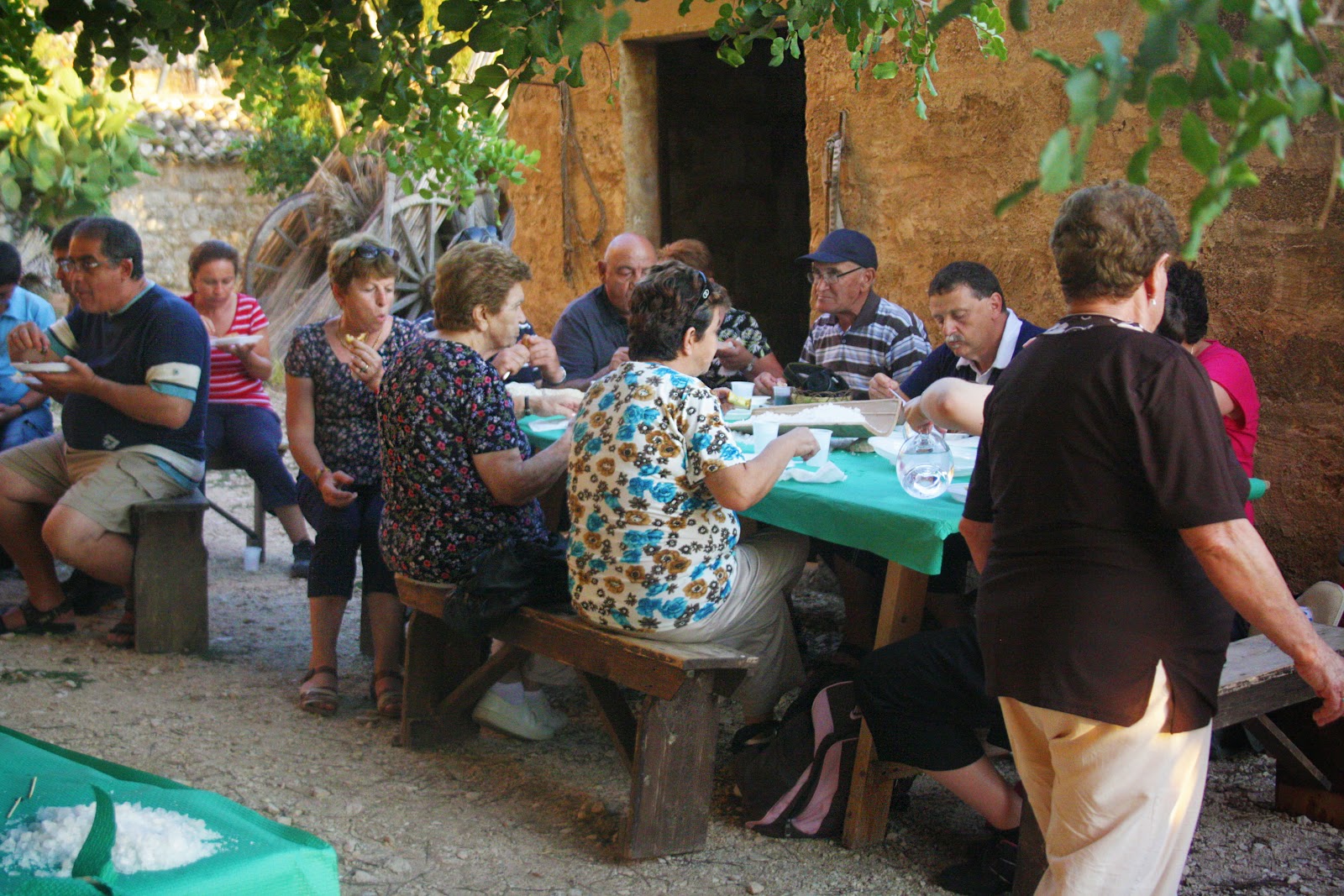 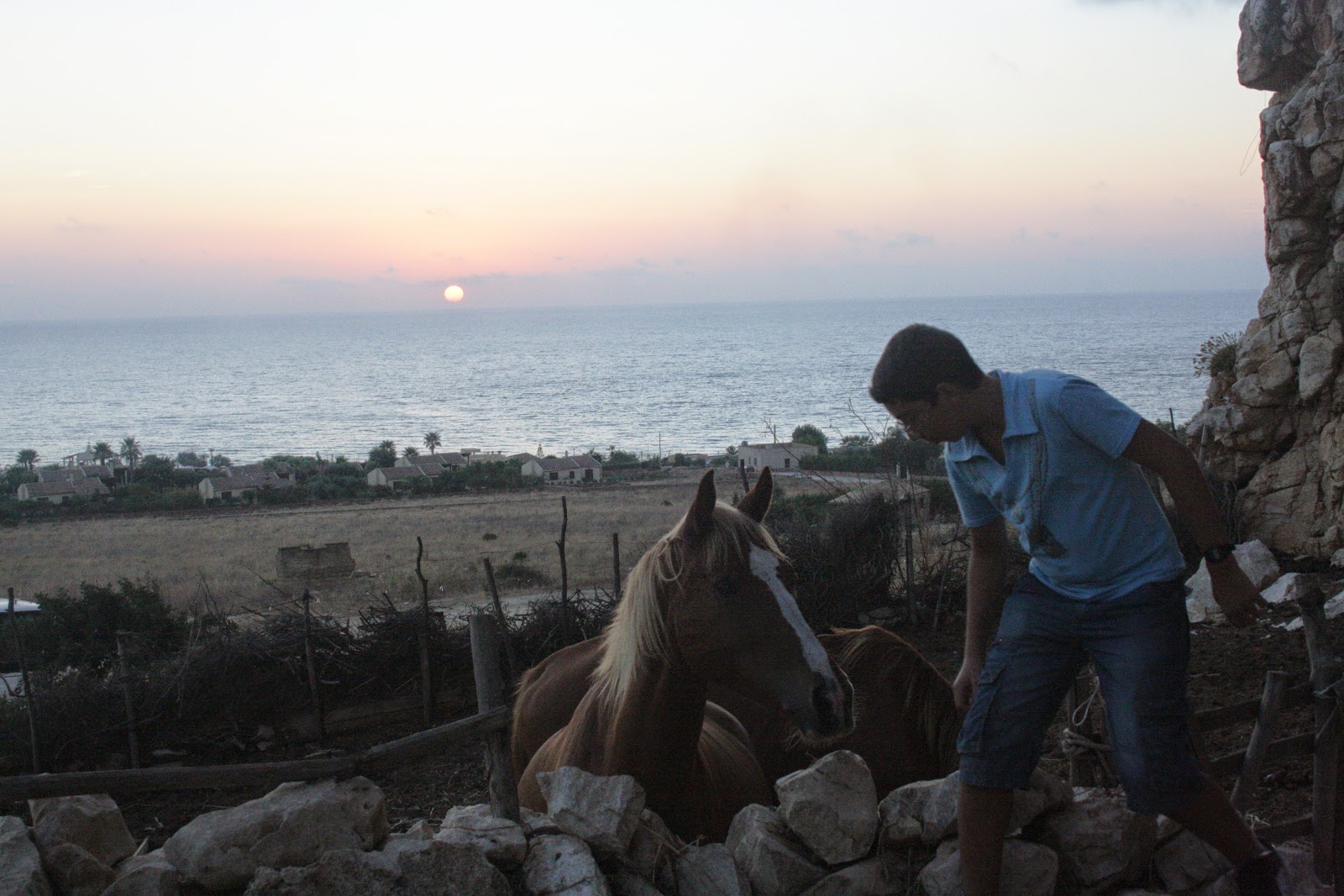 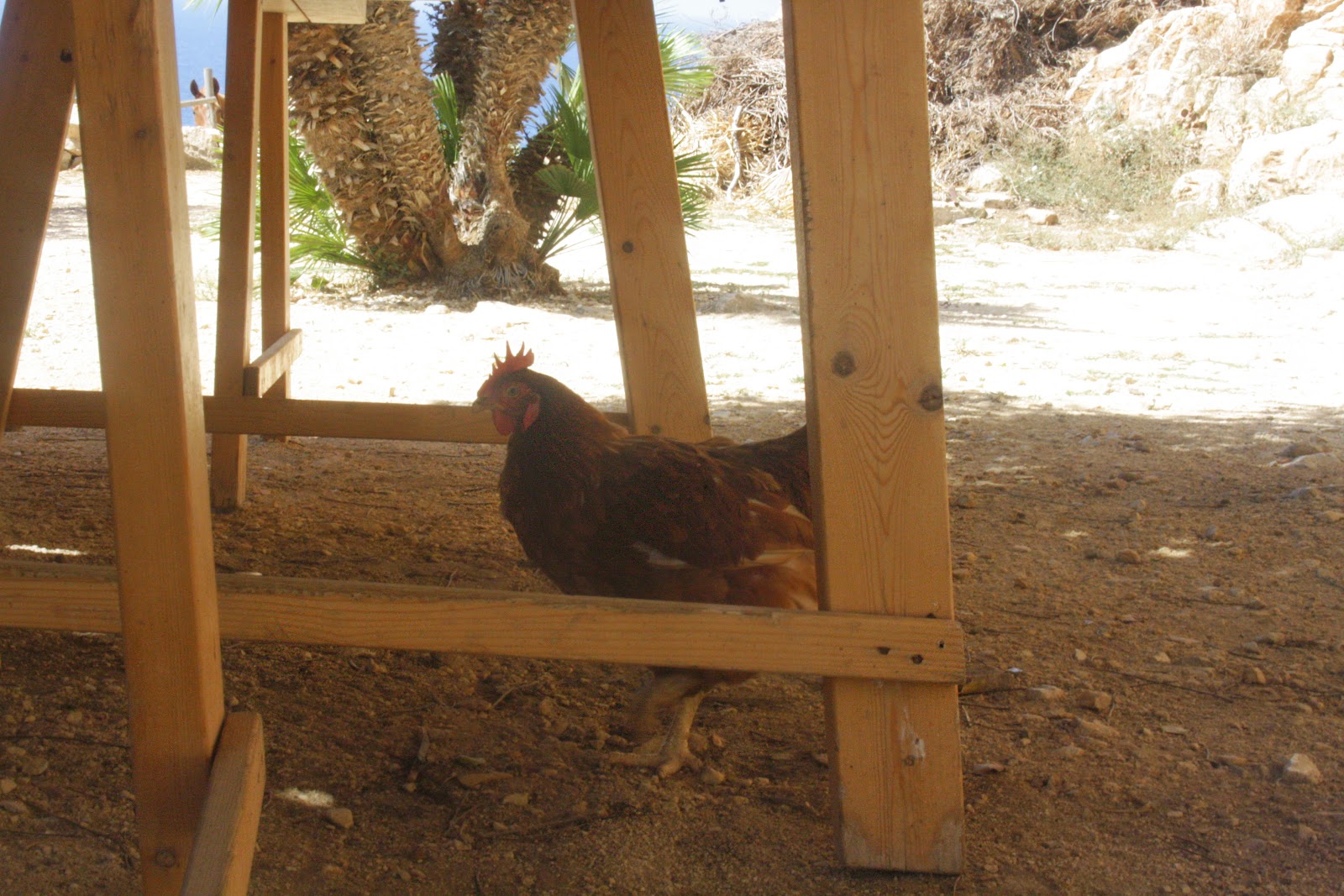 Fishing the Tuna: Story of a "Tonnaroto"

Mr Solina is an old fisherman but still remembers when he and his companions took part in 'mattanza', the tuna slaughter.
He lives in Bonagia, near Trapani, and his house is in front of the sea, few metres from the old 'tonnara'.
During the morning he goes fishing and no matter what he goes everyday: 'We can meet at 6 p.m.' At 6 p.m.? But does Mr Solina fish all the day? Maybe the fishing for them is like the sleeping for us, a necessity, an essential part of the day and the life, also if you are in retirement, in summer, in fall, till the days are long enough and the sea is calm.

But this fisherman is a weedy man, how could he raise up the tunas, also weighting three quintals, next to other 'tonnaroti' under instructions of 'Rais'? Raising up the tunas isn't simple, the Bluefin Tuna (Red Tuna for us) is heavy and when it's captured in the 'Death Room' (la Camera della Morte) with other fishes, goes crazy, if it makes a flick of the tail while you raise up it with harpoon, you could come to a bad end.

Once 'tonnaroti' (who fishes the tunas) had to be strong like Hercules, maybe today no more, because all big red tunas are captured by Japaneses to make sushi, because it's the best type, with a fat meat, in opposite of the breed called 'Yellow fins' (that one in the tin), the poorest quality.

Today there aren't many tonnare and nobody makes mattanza yet, there are the livestocks. That one in Bonagia there isn't anymore, in Castiglione's Tonnara they knead the terrible yellow fins tuna but luckily the red tuna resists in the markets and small tonnare, also if it's very expensive.

Tuna is like a sea pig, they use every part, 'ventresca' (the most precious and fattest part, the abdomen, that one craved by Japaneses for sushi), 'bottarga' (the female gonad), 'ficazza' (the fine scraps), every part is eaten, even the 'lattume', the sperm. It makes a disgusting impression but it's a gourmet food.

Before the tonnara wasn't the tuna slaughterhouse but only the ingenious trap invented by Arabs. There was the 'Rais', the supervisor who organised all operations. He was a meteorologist and understood the sea and the tunas. When he found a good place, ordered to cast the nets of tonnara. All fishermen had a competition to capture them because a part of the catch appertain to them. The mattanza lasted hours and hours, sometimes also two days, without a break. Six or seven tonnaroti pull only one heavy tuna and after again, and the sea became red.

Mr Solina repaired the nets or weaved those new ones, before with the hemp, big and thick, for this reason they became too heavy in the water. The humans of the past were really strong, I'm 28 years old and feel ashamed to lament for the backache.

Mr Solina was the only boy who knew how to make knots for the nets, for this reason he was precious and dear for Rais. The nets had to be resistant, to contain the energy of tunas and sea, also after, when they were made with the lighter nylon, the tunas pass near Sicily only in May and making a good nets was a fundamental work because the mattanza brought jobs and money for the total village.


Solina still remembers the knots. Even now, when he comes back home after the fishing, he sits at in veranda and weaves a net, it's a hobby, as the crochet for the grandmothers. It's a hobby for old people, maybe, but there aren't many people who still remember these works and I know that my grandchildren, those which will live on Mars, will never see a such work but sometimes, before going to bed, they will listen the tale of the boy to which the boss with Arab name asked him to make the secret knots to catch fishes. 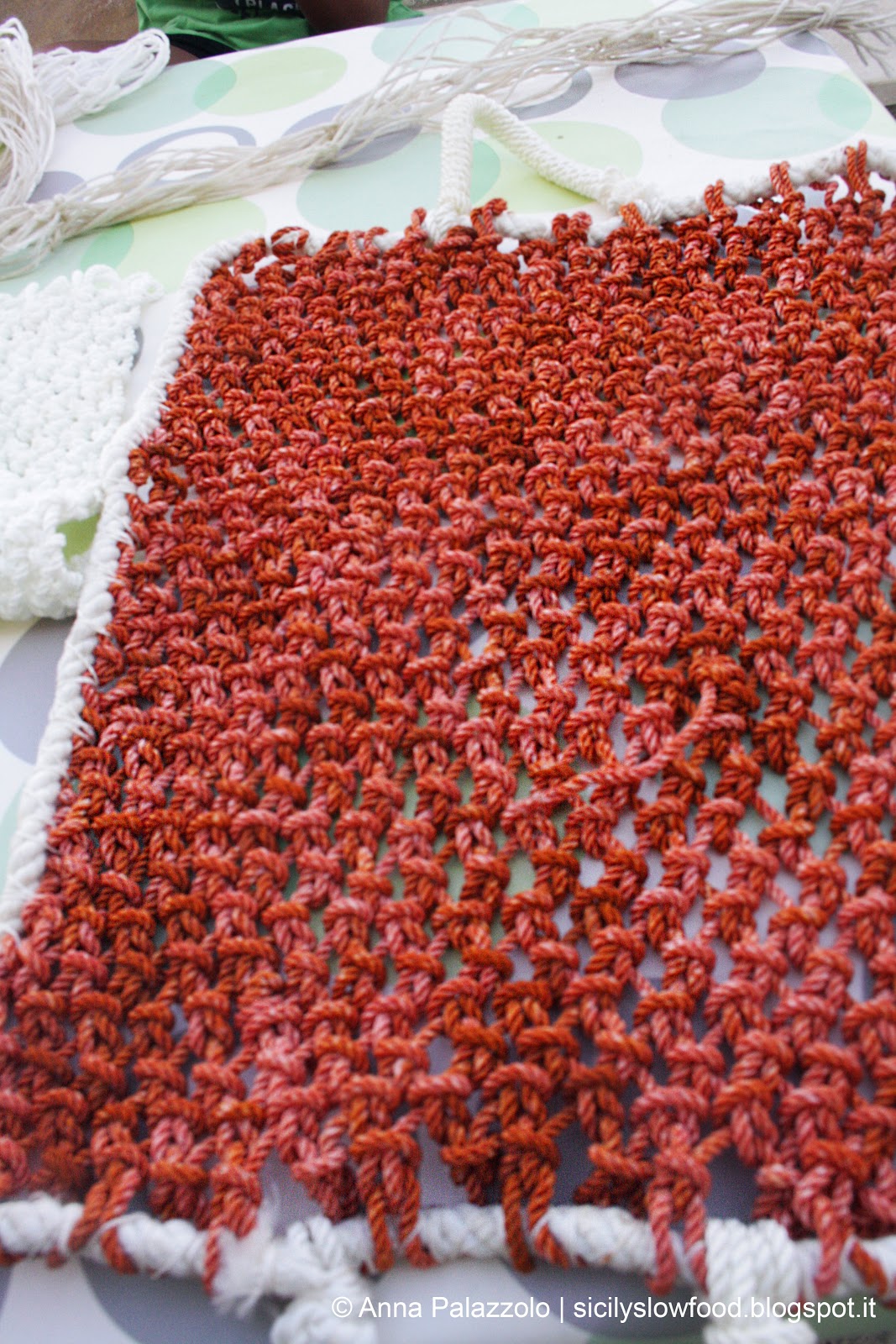 We will receive Mr Solina during the Soirée Tonni & Tonnare. He will show his mastery and tell his story :) For more information you can write to granveliero@gmail.com
Posted by Unknown at 20:53 No comments:

Thanks for surfing in our Blog!

I'm Giovanni the owner of B&B Belveliero - Granveliero in Trapani old town. After my degree and specialisation in Sustainable Tourism (in 2005) and working experience in Italy and London focusing on "back roads touring" I came back to my Trapani with voluntee to promote my unknown Sicily.

So at first I was a free lance for travel agencies/tour operator arranging unusual tours focusing on  gastronomy and culture. So for each group I arranged tasting of Sicilian food in authentic location as "baglio", lunch inside of primitive cave, meeting with fishermen preparing nets or fishing with them, local women who prepare ancient sicilian needlework (ricami), meeting with craftmen of marble or preparation of cheese in a farm.

Then in 2010 I started working as host of bed and breakfast Belveliero where I could suggest day by day unusual tours and services for my guests.  In 2014 thanks to help of my family I bought a building where from this year, 2015 I will start promoting a new idea of accommodation.
So the new one, B&B Granveliero, will be an accommodation where combining overnight stay and workshops event following the "edu-tainment" philosophy (educate and entertain). So Granveliero, the workshop accommodation where our guests can be "educated" to Sicily culture and be "entertained" with unusual workshops meeting "indigenous" people in our terrace at afternoon/evening.

In this blog we will show you Sicily - Trapani, Slowly & Food and if you would like, you can enjoy yourself staying with us.
Thanks again for reading us :)